Over the course of the last several years, the Mönnig company name has become increasingly synonymous with excellence. The company has worked closely with leading oboists in the development and improvement of new instruments. The exceptional skill in craftsmanship applied to the creation of these instruments has made Mönnig an increasingly popular choice among professionals and advanced students alike. The Albrecht Mayer Oboe d’amore AM 170 model is such an example. It is available with two bells, one standard, and the other conical with a wider flare for increased projection.

Le Roseau Chantant is proud to have been selected by Mönnig to be their sole oboe / oboe family instrument distributor in Canada. These instruments are rapidly gaining a worldwide reputation for excellence and are fast becoming the premier choice for musicians. We offer a hand picked selection of these fine instruments, with several models in permanent inventory.

The German Oboe manufacturing company Mönnig was founded in the 19th Century. Its tradition of fine hand crafted design has earned it a long-standing and prestigious reputation amongst leading woodwind instrument producers. Mönnig received the Grand Prix at the 1937 Paris World Exhibition for its fine instruments. At the beginning of the new millennium the company revived this tradition of excellence, and has earned the approval of top musicians from around the world for its full range of Oboe family instruments: oboes, oboes d’amore, Cors anglais, and the latest model of bass (baritone) oboe.

The company has introduced significant changes since the year 2000, under the decisive stewardship of directors Frank Meyer and Veit Schindler, combined with the mastery of craftsman Ludwig Frank, who perfected his craft under the tutelage of Klaus Mönnig. The company has completely restored “Villa Schuster”, originally built in 1905/1906, and its facility is now a symbol of the happy marriage of state-of-the-art modern production methods with the high standards and attention to detail of traditional craftsmanship.

Care of a new instrument

Important precautions, Playing-in instructions, and tips for the care and use of your new instrument.

Note : No particular note for this product

This is a beginner student oboe built with a simplified French Conservatoire mechanism, without compromising quality. It is made of Grenadilla wood with silver-plated keywork, and shows the same attention to detail as the acclaimed professional model instruments through which Howarth has built its international reputation. Despite their lighter weight to enable younger students to play without strain, these instruments produce a full, beautiful sound with perfect intonation. This, together with their finely-adjusted precise mechanism, will make a beginner feel like a professional musician right from the start.

With its Conservatoire system, the Prestige model represents a new standard in the Buffet Crampon oboe range. It plays evenly and responsively throughout the entire tessitura, especially in the low register. The special 'Green Line' material from which the body of the instrument is made is also state-of-the-art. 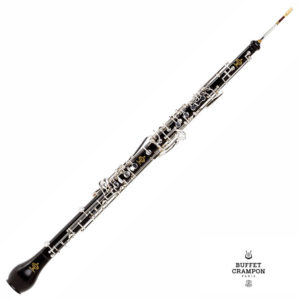 The bore of this professional model remains a defining factor in the renown of Buffet instruments, producing a generous and powerful sound with refined tone quality. This is a very reliable and solid instrument.

The Orfeo model is the fruit of a collaboration between the Buffet Crampon development team, and renowned musicians Jean-Louis Capezzali, Eric Speller, Fabien Thouand, Simon Fuchs, Francesco di Rosa, and Lucas Navarro. Together, they have applied five years of research to achieve a new level of excellence. Orfeo is a marriage of high quality French craftsmanship with cutting edge technology, resulting in an instrument that is making its mark in the orchestral and chamber worlds, as well as amongst soloists. The special 'Green Line' composite material from which the body of the instrument is made is also state-of-the-art. 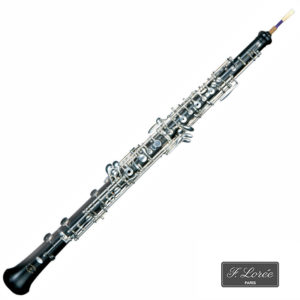 Conservatoire Lorée ROYAL ("cR+3") model Oboe in premium quality Grenadilla wood, with silver-plated keywork. This is one of the most highly sought-after Lorée instruments, with an extremely precise and reliable mechanism, and the characteristic expressive, dark sound for which these oboes have become world-renowned. They are available with either Standard or AK model (Ref. "c+3 - AK") bores. Each instrument comes with an exclusive three-year warranty. 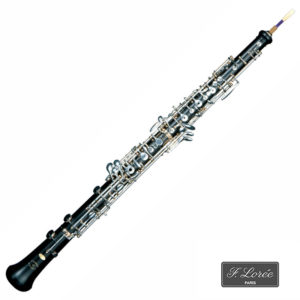 For its 125th anniversary in 2006, Lorée produced a limited edition of a new model - the « 125 » oboe. This instrument was so successful that Lorée created the « Royal 125 » oboe (Ref. "cR+-125") with the same characteristics as the limited edition model.

An excellent student oboe ideally designed for younger players. The Cabart « Petites Mains » model features clever ergonomic adaptations specially designed to accommodate children's hands - including a simplified close-spaced plateau system, and reduced weight (100 grammes lighter than a traditional instrument), yet retaining its trademark full sound. With its Cabart « Petites Mains » model, Lorée has produced the perfect instrument for young beginners. Students can comfortably use this oboe for their first 3 - 5 years of study.

Cabart represents the gold standard of quality amongst student oboes, with its close tolerances, ergonomic and precise keywork, and high quality cork pads throughout. With its hallmark high manufacturing standards combined with precise and stable tuning, the Cabart Advanced Student Oboe is an excellent choice for advanced (including Diploma) students. This is a full Conservatoire system oboe, complete with its own case and cover. 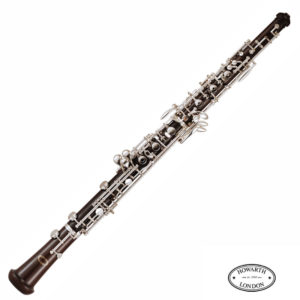 The Howarth S40C intermediate 'Graduate' series was designed for the more advanced student. Whilst its comparatively light weight makes it ideally suited for accomplished younger musicians, this oboe includes most of the essential features of a fully professional instrument, with left-hand F, third octave key, full chromatic range from low Bb, and mechanisms for almost every trill. The instrument has a wonderfully immediate, even and reliable response, and a rich, lively sound coupled with immaculate intonation. It is an ideal oboe for the serious student, and makes an excellent transition instrument between advanced intermediate and professional levels.

In 1995, Howarth began work on the development of a prestigious oboe with a new, wider bore, and a new mechanism with fine tolerances for a clean, quick action. In collaboration with internationally renowned oboists, the company created an instrument with a generous yet elegant sound that was both focused and flexible, with exceptional projection.
The Xl model became an immediate success amongst solo and orchestral oboists of international repute, its supple and responsive qualities rapidly establishing a reputation amongst professional and amateur musicians alike.

Howarth of London is proud to present its XM Professional model Oboe. Howarth oboes are famous for their incomparable quality and reliability, and for the exceptional ease and playing comfort of their mechanism. The Howarth XM Oboe joins the tradition of their prestigious XL Oboe and presents a totally new sound concept, developed in collaboration with some of the world's most eminent oboists.
The tone quality of this oboe is distinctly European in style, and has been achieved through a radically new design of the body of the instrument, the mechanism, and the bore. The Howarth XM is lighter than the Howarth XL and produces a particularly rich, flexible sound with excellent projection. 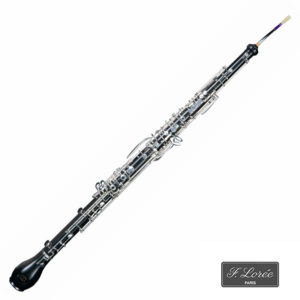 The Lorée i+3 Cor anglais, with is expressive dark sound and comfortable, precise mechanism, has a long-established reputation for reliability and tonal beauty, and is exceptionally popular with both professional and amateur musicians.

Over the course of the last several years, the Mönnig company name has become increasingly synonymous with excellence. The company has worked closely with leading oboists in the development and improvement of new instruments. The exceptional skill in craftsmanship applied to the creation of these instruments has made Mönnig an increasingly popular choice among professionals and advanced students alike. The Albrecht Mayer Oboe - model AM 155 - is just one example of this phenomenon. The oboe comes in a specially designed patented French style case.

Le Roseau Chantant is proud to have been selected by Mönnig to be their sole oboe / oboe family instrument distributor in Canada. These instruments are rapidly gaining a worldwide reputation for excellence and are fast becoming the premier choice for musicians. We offer a hand picked selection of these fine instruments, with several models in our permanent inventory. 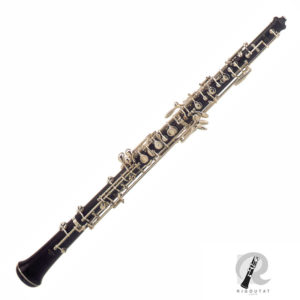 The RIEC (abreviated from the first two letters of RIgoutat and ECole) is a full Conservatoire system student instrument complete with third octave key, left-hand ('long') F key, and the full complement of trill keys. Its nickel-silver keywork is heavily silver-plated for durabilty and beauty, and snugly fitted to the body of the instrument, which is made of 100% African Grenadilla wood.
All metal screws are made of stainless steel, to prevent corrosion. With its characteristic full and flexible tone quality, the RIEC is a very popular instrument amongst students and teachers in France and internationally.

Introduced in 2013, the « Étoile » is a fresh and intriguing creation from the renowned Lorée company. Thanks to its new style of bore, the « Etoile », produces a sound with a sweet, refined quality, and has a freer, more immediately expressive response. It is designed for oboists using shorter scrape European style reeds.